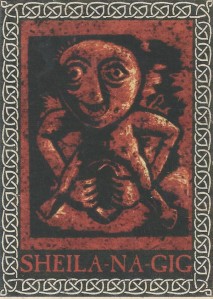 The Wall of Girls
7. Sheela-Na-Gig
This particular image of a Sheela-Na-Gig is by Essex artist Karen Cater and is of a carving in Kilpeck, Ireland.

The Sheela-Na-Gig image occurs profusely across Ireland and the UK, principally over church doorways, thresholds and boundaries. Like the Greenman foliate-face form she is a suggestively pagan anomaly in christian masonry.

However, my eye was recently snagged at an Anthropology Museum by a boat prow from Papua New Guinea, which appeared to depict a Sheela-Na-Gig astride a big fat mushroom. Now, it is certain that psilocybin Cubensis grows in Papua New Guinea, it’s big and fat and is said to induce sexual frenzy (really?). Indeed, according to the information on the cabinet, most of the other items from Papua New Guinea seemed to make reference to male and female genitalia. Some of it quite obtuse. To my eyes anyway. So back to the bleeding obvious…

I recently came across a modern rendition of the Sheela-Na-Gig on the artist Ben Varney’s blog beguilingly concealed under the heading ‘Folk Art’.