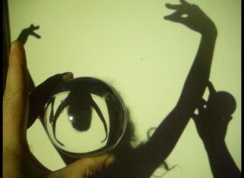 It seems I have been here a year,
living in this charmed place,
a sleepy little bower in the bosom of paradise.
Here, time moves so slowly that it feels never-ending.
There, out in the real, grey world time turns gyrations,
so that at the intake of a breath
galaxies burst into being,
only to recede into cosmic void
at the beat of the outbreath.
So that by the time
I make up my mind to return,
hundreds of thousands of years have passed,
and I suspect, everybody has evolved into a future-race
of super-bellicose giant killer-crabs,
walking sideways, angrily.