Today, the 5th day of NaPoWriMo, I went back to a poem I first constructed in 1998. 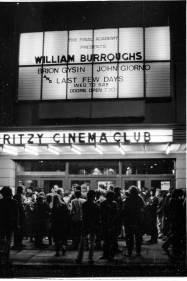 Taking the Permutation Poems of Brion Gysin as a starting point, a form that is defined simply as listing the random re-arranging of a the words in a four or five word sentence. I was particularly influenced by  his poem Kick That Habit Man. ( written manually in 1959). I actually saw this particular poem performed back in 1982 at The Final Academy in the Brixton Ritzy. That weekend found Brion Gysin performing alongside fellow beat writers William Burroughs, John Gionio, as well as sound artist Z’ev and  Genesis P-Orridge’s nascent Psychic Television.

They were performances that deeply impressed my mind, as a working class 18 year-old who had jumped the train from the home counties to be at this event, it was a peak experience in my development as a writer.

Years later, in 1998 in fact, I coerced a geek-friend into writing a simple computer programme to generate a list of word order permutations of any given four-word phrase.

Suddenly, I could write like Brion Gysin at the touch of a button.

In this context, my programmed poems are connected to a literary formal continuum that first appeared ten years before Gysin named them Permutation Poems. In George Orwell’s 1984, popular proletarian culture is dominated by “sentimental songs which were composed entirely by mechanical means on a special kind of kaleidoscope known as a versificator” (George Orwell 1984 Part 2 Chapter 4 Secker and Warburg 1949). Later,  J G Ballard in Vermilliion Sands (published in 1971), describes “a world in which verse is churned out to order by a machine, and is measured by its length” (Chris Beckett The Context and Date of Composition of an Abandoned Literary Draft Electronic British Library Journal, Mar 2014). Further, the concept of mechanically derived literature has resonances in current debate around definitions of AI. It seems to me, that Permutation Poems may yet prove to be a dominating form for poetry in the 21st century.

The most successful of my programmed poems was entitled “F**king”, and is reproduced in full on my NaPoWriMo page here.