This beauty used to sit on Jonny Marvel’s mantlepiece, in the Upstairs Lounge at Chalmers Gardens (Top Manor). 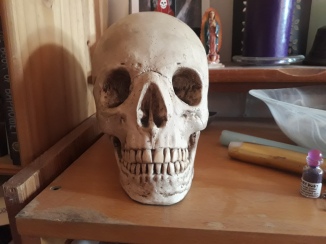 I knew of Jonny from the chaotic cavortings of Theatre Ov Thee Absurd days, and often went down to the old Boatrace to gawp at the shenanigans. I got to know and love Jonny better years later (2004) when we worked together at Libra Aries Alternative Bookshop on Mill Road, lots of cups of tea and hilarious conversations later, the council offered me a flat a few doors away from Top Manor. That’s when we began working together on the sadly-unfinished Sex Toy Library spoken word and soundscape Project.

I must have stared into the skull’s beady glass eye for over a decade of hanging out at Jonny’s. It was just one of many wonders and splendours Jonny kept around his flat.

But the skull always caught my eye. It eyed me, and I eyed it. But we never really saw each other clearly until very recently when  Dan Cooper brought it over to me during the clearance of Jonny’s flat. I had always thought it was grey-ish, Jonny’s lighting style was always atmospheric. But when I saw it in broad daylight I was astonished to see it was almost white. It was to be donated to my Skull Collection, and hopefully exhibited at The Edge Cafe in December, when they are hosting a retrospective of Jonny’s artwork for a month.

I was sad to see it had lost it’s beady eye, but ADie HiDef donated some marbles, so with the help of Toby Ilsley and some blu-tac, Jonny’s Skull may soon be entire again.