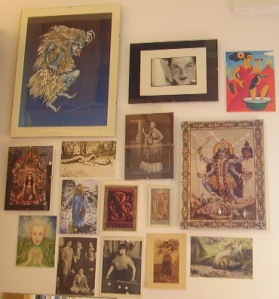 Bella Basura’s “The Wall of Girls” is an evolving site-specific installation of prints, photographs & postcards that has been following me around and building up volume for many years. Acquiring new images and losing others each and every time I move house. In the past three years “The Wall of Girls” has been dismantled and re-assembled five times.
As if my concept of womanhood is in flux.
My most recent move happened the weekend before last, and the girls were down, transported and back on the wall overlooking my writing desk within two days. I need them there. They are my barometer of myself.
Have no doubt , they will be edited, moved around and settled in over the next few months, just as I will become solidified, consolidated and celebratory. Thankful for the stillness.

I offer this projected sequence of blogs to be a snapshot-memoria to
“The Wall of Girls 2013 – Goddesses, Heroines and Role Models”.