Continuing on from the series I started last year – offering number three of pickings from my Slush Pile Bonanza.

This particular story has been knocking around, getting re-written and mucked about with for nearly three years. I have entered it for numerous flash fiction competitions and it doesn’t even get shortlisted. So, now I am reduced to offering it up as part of my Slush Pile Bonanza – Bella Basura stories that never got published…

Gray Road, April 2015, found artefacts on the slabs on the foundations of the ruined shed. Various pieces of ironwork, including 200 rusted three inch nails and model railway track.

My favourite friend one year at Junior school was a boy called Lindsay. Lindsay’s mum must have been young and groovy, because Lindsay always had the latest paisley-print corduroy waistcoat or fruit-of-the-loom scoop-neck tee or jumbo-cord loon-pants. He had long bright orange hair and I remember we became friends over his extensive collection of used ink-pen cartridges, which he had sellotaped in rows to the inside of his desk. He showed them to me and Riz one rainy lunchtime when we weren’t allowed out on the playground.
This was the 1970s, and just like any normal eight year olds we listened to pop-music all the time, we knew all David Bowie’s songs by heart and watched Top of The Pops religiously. One favourite that wasn’t David Bowie was The Monster Mash – “It was a graveyard smash”. We liked it because it reminded us of our favourite film Carry on Screaming, which had been screened on TV last christmas holiday. We’d spent the rest of the holiday playing The Carry On Screaming Game, which revolved around running around the disused carpark by the river being vampires, or zombies, or frankenstein, or Kenneth Williams, or Fenella Fielding, and screaming a lot out loud. In fact most of the game involved a lot of screaming out loud, after all it was called The Carry On Screaming Game. We also loved Alice Cooper and sang “School’s out for summer, school’s out for ever, school’s been blown to pieces…” every day at home time for the whole of the week before half term.
Also, Lindsay wore black nail varnish, his mum let him because Alice Cooper did. Nobody else ever wore black nail varnish, only Lindsay, Alice Cooper and Lindsay’s mum.

Due to some sort of building work on the main school that year, our classroom was out in one of the temporary missen huts, out beyond the playing field. There had once been two missen huts , but one had been taken away over the summer. The brick foundations had been left intact and our class had been given the project of turning it into a sunken Italian garden. One of the teachers must have been an avid Blue Peter viewer.
In the winter, the Huts (they were still plural even though they’d taken one of them away) was freezing, and we’d have to huddle around a huge oil burner in the corner of the room for heat, sometimes kids took their wet socks off to dry them on it. It was a strange place to have your classroom, separated off from the rest of the school by the playing field. I felt I lived in some idealised rural nineteenth century village school where the teachers looked like hippies, except it was slap-bang in the middle of grid-pattern pre-fabricated London-overspill dormitory new-town.
As the year rolled on into summer, we spent more and more time out of the classroom, we spent our time in the sunken garden, which was now called The Sunken Nature Garden on account of it being so overgrown and neglected, or we lounged on the playing field, out of sight from the rest of the school. We had lessons outdoors, sitting cross legged making daisy-chains in the long grass, listening to the teacher telling stories. Lindsay drew Draculas in my story book, he preferred to call them Alucards, so that the teacher didn’t understand.
In the summer term we did a class project on the founding of our town. First of all we got the history, long tracts about this were pinned around the walls. They told how thirty years ago Lord Dashingforth, a dead local landowner, had personally given permission for his ancient sacred ancestral lands to be used to build our town on, he was almost an uncle to us all. He gave personal permission for the inventor of breakfast cereals to build his first UK factory in our town, likewise a pharmaceutical birth pill manufacturer and the controversial war plane foundry by the river, and he gave permission for our Junior school to be built. HOORAY (sarcasm). This was very boring. Until one day our class was visited by a very old woman, with a walking stick and skin like old leprosy. We were told that this very old lady was the mortal remains of the sister of Lord Dashingforth, the very founder of our town. “Alucard!” whispered Lindsay to me while the old, old lady rambled on. And immediately I could see what he meant, my eyes had been opened, I now knew that the so-called generous Lord Dashingforth that they were talking about so reverently was none other than a seething vampire in reality.
At break-time, me, Lindsay, and Riz sat in the Sunken Nature Garden deciding what our contribution to the class project on the founding of our town would be. We already knew that it was going to be a play, because at half term we did the play Riz had written and directed about a favourite fluffy rabbit, which was loosely based on last term’s class project about Beatrix Potter. And, I can tell you, it went down a storm, especially at the end when we sang School’s Out and all the rest of the class, who were the audience, jumped up and down and joined in till home-time. We knew that the performance would have to be in the Sunken Nature Garden. And we also knew that our play had to expose the terrible information we had discovered that afternoon. We owed it to our public to tell them that kindly Uncle Lord Dashingforth was in fact a filthy writhing Alucard, the very founder of our town was none other than a vile vampire, with no more morals than Kenneth Williams in Carry on Screaming when he says “frying tonight”. Then Lindsay introduced a new element into the play that added all the sophistication we could dream of. “We need to dress up for it” said Lindsay, pulling a sheer lilac negligee and black nail varnish from his duffle bag. “I’ll be Lord Dashingforth, and wear this when I’m dying”. I was Lord Dashingforth’s sister, and Riz directed and played a ghost.
From that day on we rehearsed mercilessly, we painted a poster to advertise the play to our class. We attempted making costumes when the teacher taught us tie-dying, but in the end we used them as flags. Washing lines of damp psychedelic rags, strung between the Rowan and Wild Cherry saplings, fluttering colour in the summer blanched meadow of the Sunken Almost-Wild Garden. 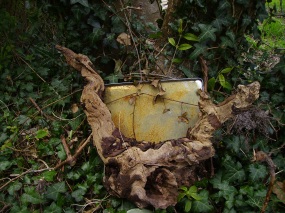 Herne in the tree stumps

And very soon it was the end of term and the big afternoon arrived. The play, as we performed it, went like this: